Promotes the pursuit of continued excellence in patient care, for which Dr. Marks has set the standard.

The vision and dream of Perry “Dick” Swanson was to create a fund to honor Stanley M. Marks, M.D. and simultaneously advance innovative cancer care and research. His dream caught fire when others also picked up the banner for the cause.

The Stanley M. Marks Blood Cancer Research Fund was established to create a meaningful vehicle for patients and others who wanted to make a difference for cancer. The intent was to provide a critical base of support for important research and clinical efforts, establishing a highly visible symbol of the standard of excellence in patient care which was important to Dr. Marks.

Robert and Barbara Crown held an amazing, glamorous casino themed event in Naples, FL—together with many of their friends and colleagues, a remarkable $500,000 was raised. This combined with early support brought the fund to almost $1 million.

In the Spring of 2007, the first ever Pittsburgh Wine Festival Dinner was held. Hosted by Ken and Tracy Melani in their Fox Chapel home, donors contributed significantly and altogether $1 million was raised, bringing the fund to $2 million.

Time went on and soon there was interest generated from the endowment, enough to begin to fund some very substantial research within the UPMC Hillman Cancer Center.

Initiatives have continued…one of the most significant is the Stanley M. Marks Golf Classic which has been held every year for the last three years in beautiful venues throughout western Pennsylvania. And the fund has come full circle with volunteers—it is Perry Swanson’s son, David Swanson, who is now organizing this event with an army of others through a private foundation called Stanley M. Marks Blood Cancer Research.

Money raised through the golf tournament will be given to the fund held at the UPMC Hillman Cancer Center to further enhance research in blood cancers. This army includes names like Jeanne Caliguiri, Heather Keicher, Joe Curtin, Pat Gallagher, and Gary Bowser.

Stanley M. Marks, M.D. has enjoyed a truly remarkable career and has built a stellar reputation in Western Pennsylvania and beyond. He is Chairman of the UPMC Hillman Cancer Center, Chief of the Division of Hematology and Oncology at UPMC Shadyside, and Professor of Medicine at the University of Pittsburgh School of Medicine. He is consistently named as one of the Top Physicians in Pittsburgh as well as Best Doctors in America in hematology and medical oncology.

Dr. Marks has exhibited remarkable leadership—he believes that his ultimate responsibility is to provide the very best hematology/oncology care and facilitate the development of other people in this endeavor.

This fund is critical for the vision for the future of UPMC Hillman Cancer Center as it will support innovative research in cancer immunotherapy and personalized medicine. As such, it is vital to continue raising additional support for the Stanley M. Marks Blood Cancer Research Fund.  Given the progress that has been made with the Fund, there can be no more important investment to promote outstanding research and patient care for our community and beyond—all in the name of someone who has set the standard.

What Has the Fund Supported?

Gifts to the Stanley M. Marks Blood Cancer Research Fund have been well-placed investments because there is a remarkable rate of return on projects supported. The Marks Fund provides support to some of the most talented scientists at UPMC Hillman Cancer Center. Groundbreaking research is helping to more effectively diagnose, treat and prevent cancer. 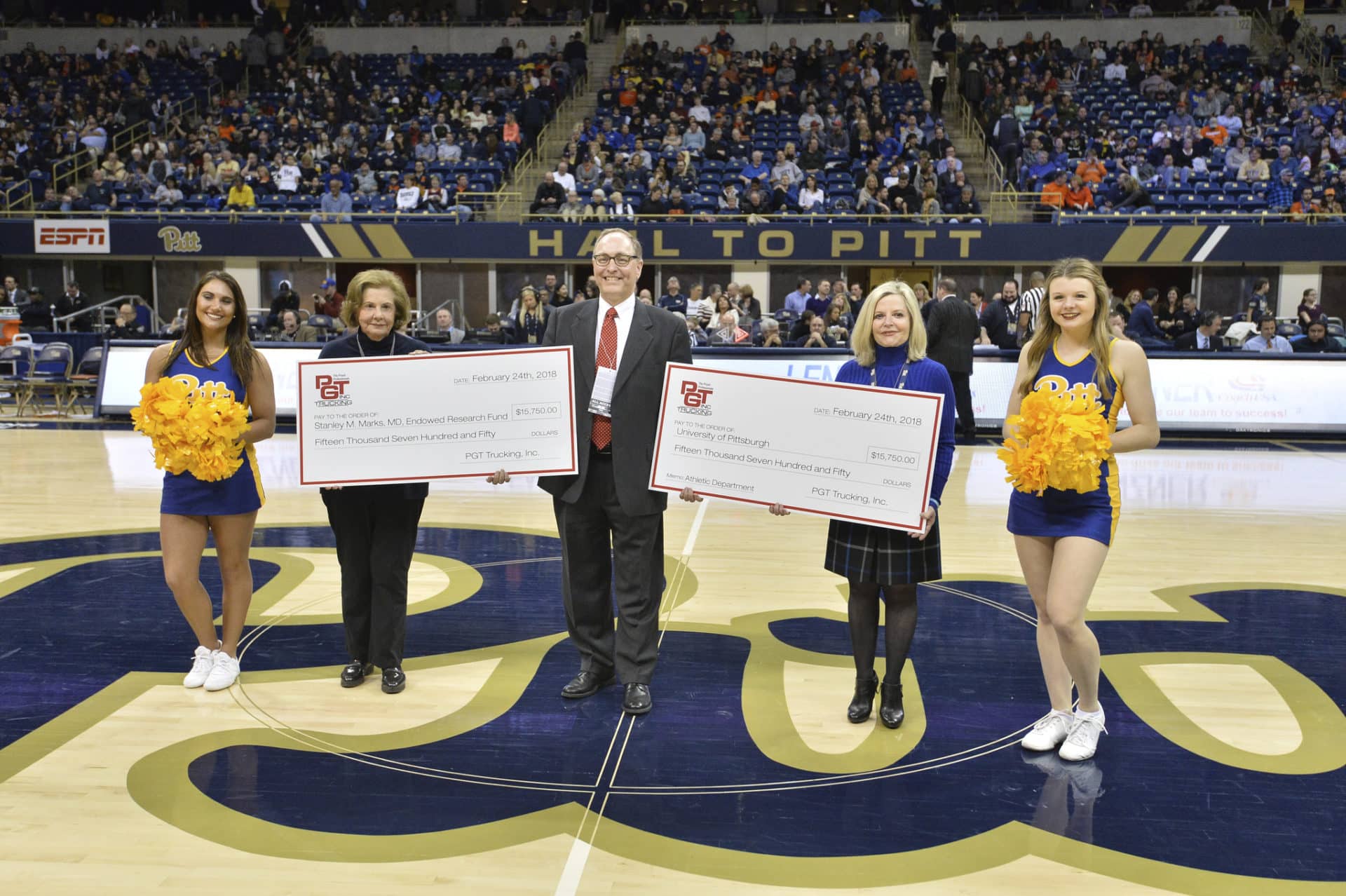 PITTSBURGH, Feb. 2018 – The check presentation by PGT Trucking, for both SMM Blood Cancer Fund and University of Pittsburgh Athletic Department.

The Stanley M. Marks Blood Cancer Research Fund continues to make an indelible impact on the overall body of knowledge of cancer treatment, detection, and prevention, the UPMC Hillman Cancer Center, and the 100,000 patients it serves annually. It does so by supporting highly innovative research at UPMC Hillman Cancer Center aimed at the development of new and more effective therapies for patients with all types of cancers as well as early detection and prevention strategies to reduce the burden of cancer regionally, nationally, and globally.