The award is named after Pitt running back James Conner, who was declared cancer-free in 2016.

James Conner, Leukemia Survivor
James Conner was honored at the 2016 Stanley M. Marks, MD Golf Classic and it was that year that the annual Courage Award was renamed in his honor. In 2015, as a junior running back for the University of Pittsburgh, James was diagnosed with Hodgkin’s Lymphoma. This young man never stopped his drive to return to the football field. After many rounds of chemotherapy, he would show up for practice with a surgical mask protecting him from infection, and power through the drills leading his teammates to coin the phrase “Conner Strong.” His return to the field was inspiring and his tenacity, strength and work ethic eventually caught the eyes of the Pittsburgh Steelers where James was successfully drafted and now in the running back position.

Less than one month after he was declared cancer-free, Pitt running back James Conner took a break from his preparations for the upcoming season to help raise $400,000 for cancer research.

Conner was honored at a dinner hosted by his oncologist, Dr. Stanley Marks, on Friday night at the Field Club in Fox Chapel.

Not only was Conner honored with the award, which is given annually for the past 30 years to a cancer patient, it was renamed the James Conner Courage Award, Marks said.

Conner showed a video and spoke to an audience of more than 300 people about his six-month battle with Hodgkin lymphoma. Included was Marks' phone call to Conner in which he reported he was cancer-free.

“He was phenomenal,” Marks said. “Emotions were so high. James really got choked up.”

Marks said Conner is regaining much of the strength he lost during his 12 chemotherapy treatments.

“He's been working out like an animal,” Marks said, noting Conner also is watching his diet. “He hardly ate anything at the dinner. His arms are just enormous, rock solid. He has really put on so much muscle since he started working out (after being declared cancer-free last month).”

Marks said most of the money raised will stay within the local region, with much of it going toward his Endowed Research Fund that supports the University of Pittsburgh Cancer Institute.

The Steelers, 'instrumental' in
city's recovery, are back home

DRESSED IN A BLACK Pittsburgh Steelers shirt, the woman sniffed back tears as she made her way through the still-crowded memorial outside the Tree of Life Synagogue in Squirrel Hill, gently, unconsciously rolling a small stone in her right palm. I never intended to start this "week with the Steelers" diary with a visit to Squirrel Hill, but you realize quickly that, in this town, there's no way to separate the two: On this Monday morning, the two items above the fold in the Pittsburgh Post-Gazette are James Conner and the Squirrel Hill Massacre. There are more parallels: David and Cecil Rosenthal, two of the 11 victims in the deadliest attack on the Jewish community in United States history, were brothers of Michele Rosenthal, the team's former community relations manager; head coach Mike Tomlin lives a block from the synagogue, near Art Rooney II, as well; two buses of Steelers players, along with Hall of Fame running back Franco Harris, attended the victims' funerals last week. In Baltimore, eight days after the attack, Ben Roethlisberger sported cleats with the now ubiquitous "Stronger Than Hate" logo featuring the star of David as part of the Steelers logo. 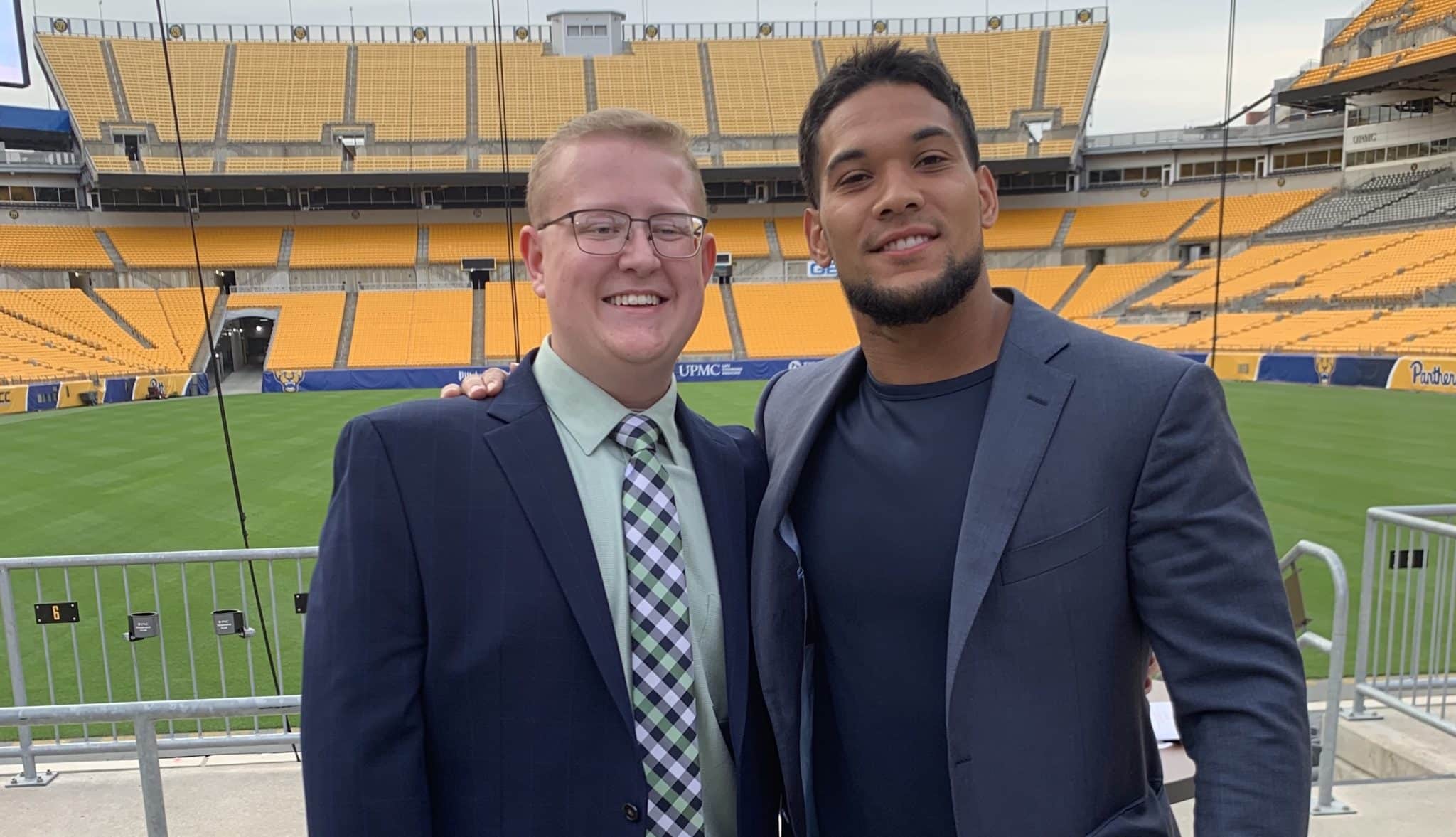 In 2016, Harrison Brown was preparing for his Freshman season with the South Fayette Football Team. This southern Pittsburgh school district has had several championship seasons and Harrison was ready to start his high school football career as a defensive tackle and center for the Lions.

This year, 2019, Harrison will be a senior. It will mark the first time he will put on his school football uniform to join his teammates on the field.

The day Harrison was to board a bus for a team-building weekend in Ohio was the day he learned that what he thought was exercise-induced asthma was instead a tumor resting on his chest. Harrison was diagnosed with Hodgkin’s Lymphoma.

Bob and Vicki Brown were stunned as they were told to take their son immediately to UPMC Children’s Hospital. Their world would forever change at this very moment.

But, they say, Harrison courageously listened to the diagnosis and moved into tackling his new path just as he did athletically and academically.

Harrison missed 89 days of school of his freshman year as he underwent five, 21-day cycles of chemotherapy followed by radiation. His first day of school didn’t happen until December of 2016.

Two months later, Harrison relapsed. This time he would need an autologous stem cell transplant, a treatment in which a patient’s own blood cells are removed and then transplanted back after several rounds of chemotherapy.

Harrison’s second relapse would happen just seven months after that transplant in February of 2018. Again, this young man set his sights on doing whatever was necessary to get through this next cancer diagnosis and treatment. This time it would be a stem cell transplant using donor cells. The allogeneic stem cell transplant, which was followed by full-body radiation, kept Harrison from starting yet another year of school on time.

Harrison spent more days in the hospital than in the classroom during his first three years of high school. But, every single day he studied, was tutored, and powered through his advanced placement and college-level courses amid hospital rooms, chemotherapy, and radiation treatments. What is most remarkable is he also maintained an incredible grade point average which today sits at 4.456.

In addition to his parents and family, Harrison had the full, unconditional support of the South Fayette Football team every step of the way. There were text messages, visits, and those few times Harrison and his dad would sneak out to his team’s football game and watch, with a surgical mask on, from the far end of the field. And after winning the WPIAL District 4A Championship this past fall, the team ran towards the sideline of Heinz Field to share their victory and championship trophy with their teammate.

Harrison Brown, the 2019 James Conner Courage Award recipient, is a positive, intelligent, courageous young man who refuses to be defined by cancer.

Jimmy Hernandez was first diagnosed with cancer following his high school graduation in 2013. At the urging of his girlfriend and her mother, Jimmy went to the emergency room and was immediately taken by ambulance to UPMC Shadyside Hospital. For two months, Jimmy underwent intensive chemotherapy treatment, while his family kept a constant vigil at his bedside.

Jimmy’s leukemia returned in 2016 almost three years to the date of his initial diagnosis. This time, a stem cell transplant was needed to replace his unhealthy cancerous cells with healthy, blood-forming cells from a donor. The best results involve someone with a 100 percent match. But recent medical advances have shown that a 50 percent match or a haploidentical donor can be used. That donor is usually a parent or in some cases a sibling.

Today, Jimmy is engaged to his longtime girlfriend, Alexandra Habers, and Jimmy now works for a UPMC pediatric practice as a multi-lingual patient services representative.

The nomination of Jimmy Hernandez Valencia for the 2018 James Conner Courage Award came from Dr. Rafic Farah who thought his continuous positive attitude, supportive family, and the strength he exhibited in his long fight with cancer made him the perfect recipient.

Darran was diagnosed with Acute Lymphoblastic Leukemia (ALL) on November 7, 2016. She complained of leg pain a few days prior and after a night of uncontrolled leg pain, her family took her to the Emergency Department on November 6.  She showed no other symptoms and was laughing, playing and acting like a normal five-year-old right up until her diagnosis.  It was only a few hours later that her family received the initial diagnosis - Leukemia.

Darran was admitted to Children's Hospital of Pittsburgh that day and scheduled for tests in the morning to confirm the diagnosis. Since then life has been such a whirlwind.

That was all about a year and a half ago (will be current in May 2018) and it has been a steady stream of treatments, pills, hospital stays and clinic visits. But all the while Darran's family has remained positive — having stayed the course they hope to have her leukemia eradicated in March of 2018 with a final chemo treatment.

Darran is currently pushing through first grade with her twin brother, Declan and has missed very few days, sometimes getting tough treatment in the morning and then heading to school for the afternoon. Other times she fights through fatigue, nausea, and pain just to grit through the school day — all the while she hasn't fallen behind, which is a true testament to her toughness.

The day she was diagnosed, Darran's father called Dr. Stanley Marks for guidance and he still remembers what Dr. Marks told him. He said, "It isn't going to be easy. It's going to be a long, tough road, but she can get there. She can beat it but there won't always be good days."

The Stanley M. Marks Blood Cancer Research Fund continues to make an indelible impact on the overall body of knowledge of cancer treatment, detection and prevention, the UPMC Hillman Cancer Center, and the 74,000 patients it serves annually. It does so by supporting highly innovative research at UPMC Hillman Cancer Center aimed at the development of new and more effective therapies for patients with all types of cancers as well as early detection and prevention strategies to reduce the burden of cancer regionally, nationally and globally.